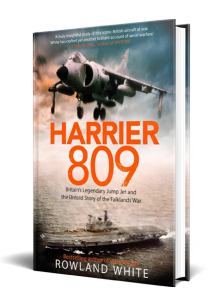 ‘Harrier 809 is a truly insightful study of this iconic British aircraft at war, and a tremendous account of the personal experiences of those who flew it in battle. By turns exciting, moving and enlightening; Rowland White has crafted yet another brilliant account of aerial warfare’  JOHN NICHOL

‘This is utterly brilliant: a fantastically exciting book about those amazing Harrier jets in the Falkands War but so much more besides. The very best narrative history has human drama at its heart and White has a richly drawn cast of unforgettable characters – both British and Argentinian – that with the aircraft, ships and weapons of the day make this a sizzling page-turner from start to finish. Not only does it have some of the best aerial action sequences I’ve read, it also offers a fascinating and vivid window on the world of 1982. It’s an overused term but this really does read like the best kind of thriller. His best book yet’   JAMES HOLLAND

‘Utterly thrilling and totally absorbing. White conveys brilliantly the spirit of a great aircraft – and the men who flew it’   PATRICK BISHOP

‘Rowland White has done it again! A compelling, fast-paced narrative that thrusts us into a fascinating cockpit-view of the Falklands War. Harrier 809 provides a true window into a conflict that shaped the modern path of Argentina and the United Kingdom; a “must read” for serious military aviation enthusiasts and historians alike!’    DAN HAMPTON

‘Set against the broader context of the Falklands War, Harrier 809 brings the squadron’s story to life in fine and highly readable style’ GARTH ENNIS

‘Rowland White has scored again. Harrier 809 reads like a fast-paced military adventure novel only better because every word is true. White has brought us an up-close, inside-the-cockpit saga of a band of heroes in the Falklands air war. Riveting’  ROBERT GANDT

‘Deeply researched and written with Rowland White’s trademark brio, Harrier 809 is the thrilling story of the “forgotten” Sea Harrier squadron of the Falklands War, one that arrived late yet played a key role in Britain’s unlikely victory.  A superb book’  SAUL DAVID

‘A story of skill, courage and imagination that resembles a miniature Battle of Britain …  a military adventure, written with expertise, a tale of initiative, skill and courage, of pushing beyond the rules … A thrilling account’ THE SPECTATOR
‘White writes narrative history like a novelist, putting you in the cockpit of briefing room, but Harrier 809 is far more than the story of the jump jet and its dogfights over the Falklands … it’s a mix of aviation history, spy and modern day Battle of Britain … This is a story of politics, invention, determination, courage, of brave naval aviators on both sides and not a little luck … the skirmishes above the Falklands that pepper the second half of the book are in-the-cockpt seat=pf-the-pants stuff and give a real sense of the speed of jet combat’ NAVY NEWS
‘Harrier 809 is as compelling as the best thrillers while providing worthwhile new history … The meat of the narrative is, of course, concerned with aerial combat over the islands and Harrier 809 does not disappoint … The way he balances all the various elements and characters throughout, while maintaining that focus is the mark of a superlative writer at the height of his powers.  Harrier 809 might just be White’s best book yet.’ WARSHIPS