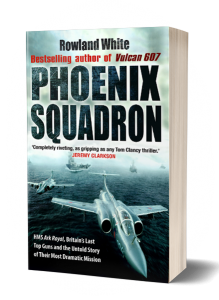 ‘This page-turning account pays homage to the strike-jet pilots and quick-thinking officers – many of them Second World War veterans – whose death-defying skills got the job done and reads more like a Tom Clancy novel than a history book.’ Daily Telegraph

‘A page-turning thriller of a book … the story never lets up, the pace escalating until the final nerve-wracking mission itself …White’s obvious passion infuses every page and is highly infectious, while the level of detail should send any budding Tom Clancy rushing to the bookshops … a gripping, hugely entertaining book that reminds us that we sacrifice strike power at our peril.’
James Holland, Sunday Telegraph

‘A truly outstanding narrative every bit as good an unstoppable as his previous title, Vulcan 607 … a gritty story … there is no better read’ Aviation News

‘Those who read the exceptional Vulcan 607 will know what to expect … Combining thorough research, including first hand accounts, with superbly-written narrative, the author puts the reader in the cockpit and provides a riveting read.’ Fly Past

‘Aircraft carriers, jet fighters and a crisis on the other side of the world. Who could ask for more? It takes an obscure corner of British military history and weaves a story as gripping as any Tom Clancy thriller. It’s completely riveting.’ Jeremy Clarkson

‘From the cockpit of a fighter jet to the violently pitching deck of an aircraft carrier at night, Rowland White combines pulse-pounding tension with riveting detail. If only all military history was written like this …’
Andy McNab

‘A remarkable story told with skill and dedication. Rowland White’s Phoenix Squadron is a welcome, admirable addition to the history of British naval aviation. I enjoyed it. And I learned a great deal.’ Len Deighton

‘A gripping tale of military tenacity and ingenuity, Phoenix Squadron is yet another high speed, adrenaline pumping page-turner from the accomplished author of Vulcan 607 … uses unrivalled contacts and expertise to uncover a little known military adventure, catapulting it into public gaze and undoubtedly creating another best-seller.’
John Nichol

‘A gutsy, you-are-there story that throbs with the sound and fury of carrier operations. This is military history as it ought to be told’ Robert Gandt

‘An adrenalin-suffused, thoroughly exhilarating, technicolour rollercoaster ride … can be properly described as the UK’s The Right Stuff. Bearing in mind the stature of Tom Wolfe’s achievement 30 years ago that is a huge accolade, but White’s efforts deserve it … a gleaming tour de force. Suberb. Irresistable.’ Warships

‘A cracking read. Based on official documents, interviews and contemporary accounts, White weaves a lively – and complex – narrative.’ Navy News

‘Absolutely riveting, an excellent account of this daring and dangerous, but almost unknown, mission.’
britains-smallwars.com