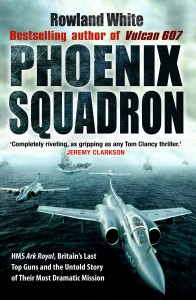 HMS Ark Royal was the most powerful warship the Royal Navy had ever put to sea.  50,000 tons of British Sovereign Territory – a floating airfield that was home to 2,700 men, a stockpile of nuclear weapons, and the most modern, capable air force in Europe.  Launched by catapult from a pitching deck Ark’s squadrons of supersonic F-4 Phantom interceptors, Blackburn Buccaneer strike jets and state-of-the-art Sea King helicopters were a match for anything else in the sky.

But, laid down in 1943, by the early seventies, Ark Royal was in the twilight of her career. Only kept in service to help face down the Cold War threat from the powerful Soviet Navy, it seemed Ark would play no further part on the world’s stage.

Then, in January 1972, intelligence reached Whitehall that British Honduras – now Belize – was threatened with imminent invasion. To defend the colony Britains’s response would have to to immediate and unequivocal.  And Ark Royal offered the only effective means of preventing the little Central American country being overrun by battle-hardened, US-trained Guatemalan paratroops.  But, first, the old carrier would have to endure a high-speed, 1,500 mile dash across the Atlantic towards the Gulf of Mexico.  Only then would it be possible to execute an audacious, record-breaking plan to launch of pair of Buccaneers on an extraordinary and unprecedented long-range mission.  It was an operation loaded with difficulty and danger.

Drawing on many hours of inteviews with the participants and previously unseen, classified documents in the UK and abroad, Rowland White, bestselling author of Vulcan 607, has pieced together this remarkable episode for the first time.  Phoenix Squadron brings to life a unique, unfamiliar and thrilling piece of post-war British military history: the world of the Fleet Air Arm’s last Top Guns.