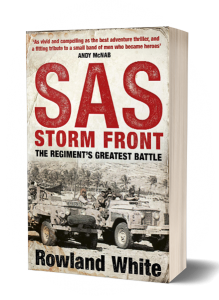 ‘A well-kept secret beyond Stirling Lines, The Battle of Mirbat has been the stuff of Regimental legend for as long as I can remember. Quite simply, it was the SAS’s answer to Rorke’s Drift. Catapulting us from the cockpits of heavily armed, low-level attack jets to the beating heart of elite Special Forces soldiers under siege, Storm Front tells this epic story as only the author of Vulcan 607 can. It’s as vivid and compelling as the best adventure thriller, and a fitting tribute to a small band of men who became heroes.’ Andy McNab

‘Gripping, revealing and extraordinarily well-researched, Storm Front is a riveting new account of a little known, but crucial war. Combining page-turning military action in the air and on the ground with a clear-sighted understanding of the big picture it brings to life the campaign in Oman more vividly than any other book I’ve read.’
Sir Ranulph Fiennes

‘The best account I’ve ever read of this legendary battle. Takes you right to the heart of the action.’ Sgt Dan Mills, author of Sniper One

‘This is a rare insight into the battle that defined the modern SAS. Storm Front is the best book you will read this year.’ Colonel Tim Collins

‘I loved Storm Front. A period of history–and more particularly a single shining moment–that has been obscured by myth and legend. Here is the truth of it all at last in all its spine-tingling, spine-straightening glory’  Neil Oliver

‘A most valuable historical document, and a very good read’ Aircraft Magazine

‘This gripping page-turner of a book switches from action on the ground to that in the air more vividly than any I have read.  It comes highly recommended.’
Aeroplane Magazine

‘Exceptionally writers appear, like for example Antony Beevor in Stalingrad and his other books, who manage to convey the picture of a campaigh as a whole with the real drama experiences by the individual soldiers.  Rowland White is such an author who combines the ability of a thriller writer with a historian’s well researched accuracy.’
The Centurion (RAF Regiment Association Magazine)

‘A gripping account of events leading up to the battle, the fighting, and the aftermath.’ Britain at War Magazine

‘Storm Front is a brilliant reconstruction of the clandestine role of the SAS and RAF in the bloody, semi-secret Battle of Mirbat.   Rowland White is by far our most vivid and able chronicler of Britain’s less-known military exploits.’ James Hamilton-Paterson, author of Empire of the Clouds

‘Reactionary Sultans, gallant Army officers, intrepid ground attack and helicopter pilots and highly trained Special Forces soldiers, this book has them all.  But it is not an adventure novel but a true and incredibly detailed account … the attack on and the defence of Mirbat is precisely told, bringing the reader right into the action and recounting the bravery and resourcefulness of the soldiers involved, a truly epic engagement concluding a fine military historical book.’ News Sheet (Fleet Air Arm Officers’ Association Magazine)

‘An outstanding, gripping book that reads like a thriller.  It succeeds in properly getting under the skin of the SAS and their role in Oman’s secret war revealing much that I’d never come across before.  And I was there.  I enjoyed it immensely.’ Ken Connor, author of Ghost Force: The Secret History of the SAS