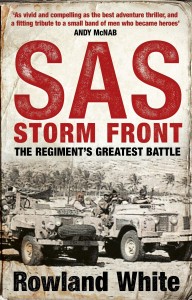 In early 1970, the Commanding Officer of 22 SAS flew into the strategically critical Sultanate of Oman on a covert intelligence mission.  A Communist rebellion in the south threatened not only the stability of the Arabian Peninsula but more importantly the vital oil routes through the Persian Gulf.  Within six months the Regiment arrived in theatre to lead a fierce, secret war against the rebels.

From a remote RAF airbase in the desert, an elite band of British pilots, flying difficult, dangerous missions in Strikemaster jets and Vietnam era Huey helicopters, were scrambled alongside them.

For the British soldier and airmen, it was to be no easy victory.  The enemy well supplied with weaponry and training from China and the Soviet Union, and despite confronting the largest assault force ever deployed by the SAS, many months later the rebels were still fighting back.

At dawn on 19 July, 1972, a force of nearly 300 heavily armed, well-trained guerillas attacked the little fishing port of Mirbat without warning.  Between them and glory stood a team of just nine SAS men, and the skill of the British fighter pilots.  The scene was set for an epic encounter; a modern day Rorke’s Drift.  Their heroism would become legend.

Drawing on extensive interviews with participants from the SAS, the RAF and the Sultan’s Armed Forces, most of whom have never spoken about their involvement before, as well as previously classified documents from both the UK and Oman, Storm Front weaves an unputdownable tale of intrigu, action, daring an astonishing bravery in the face of overwhelming odds.