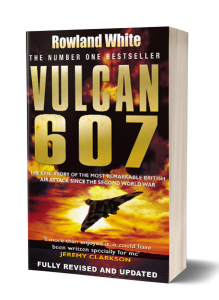 ‘If the last bombing epic that you remember was the Dambusters’ Raid, this is the book for you …White tells a story that has scarcely been told before, one full of hidden dangers and pitfalls … the raid itself reads like a thriller full of nail-biting reverses … it is tensely absorbing to read how nearly it came unstuck … We’ve come a along way since Biggles’ Daily Mail

‘Gripping … It was and remains the longest range air attack in history. The task was simple. The means by which it was achieved, White demonstrates, was mind-boggling complex, sometimes chaotic, occasionally farcical and never less than fascinating’ Guardian

‘Engaging, exciting … This is a remarkably complete and evocative book. White deftly traces the Falklands conflict and it’s accompanying geo-political framework … an excellent history … a most worthy tribute to the men and aeroplanes.’ Aeroplane

‘Ingenuity, guts, skill, planning and vision … the title doesn’t do justice to the content of the book. The author provides a good background to the entire conflict, politically, strategically, tactically and from a Port Stanley point-of-view and he’s done it all without crass jingoism. The pace is fast, the scenes change quickly and the language is at times colourful. This all adds to the work … Some have compared the book with a Tom Clancy, but I think it has the making of a Paul Brickhill. I could not put it down.’ Flypast

‘This has to be the Aviation News Book of the Year … it is utterly impossible to put down. It focuses attention on precisely the right part of a multi-layered story that unfolds with high drama … it exposes the tensions within, and the professionalism throughout, post-WW2 RAF operations in a way we have not seen expressed in print before. It smacks of the real world devoid of embellishment and in the way the story unfolds hardly has room to pause … [the operation] showed a stunned world that the spirit that fired the determination of RAF Bomber Command in WW2 is very much alive and well.’ Aviation News

‘You can feel the atmosphere … a great yarn’ Air International

**** ‘The author’s great success is telling the story so compellingly that at times it reads like a work of fiction. The text underlines the enormity of the challenge of mounting the raid, the team effort involved and the resources and ingenuity put into its execution. A cracking good read which really takes the reader into the cockpit.’
Aircraft Illustrated

‘These flyers weren’t only stratospherically skilled, they must have been, by several orders of magnitude, braver than you or I. Flying, for them, was about ceaselessly pitting cold-eyed skill against rearing disaster.’ Top Gear

‘Through meticulous research, and interviews with the personnel involved, Rowland White has now recounted one of the most amazing aviation feats ever … With breakneck pace, the author describes the gargantuan effort required to get a single Vulcan over the target … a most thrilling read.’ Air Forces Monthly

‘Pacy, gripping, well-researched … the main narrative covers the huge difficulties involved … White takes us through all of these problems rather like the unfolding of a detective novel, yet his accuracy and technical detail is almost faultless. … a real page-turner … an excellent historical record of what was the longest attack mission ever carried out. Recommended.’ Royal Air Force Historical Society Journal

‘Big, heavy bombers. Some proper old fashioned heroism. And a triumph of ingenuity over limited funding. So far as I’m concerned, it has the lot, and to cap it all, it reads like fiction when it’s actually fact. I more than enjoyed it, it could have been written specially for me’ Jeremy Clarkson

‘Exciting and breathtakingly pacy …this is exactly how modern history should be written.’ Andy McNab

‘Vulcan 607 is an exceptional account of a little known RAF operation during the Falklands War in 1982. It captures perfectly the tension, fear and excitement of the crews involved and whilst I read it, I felt as though I was living the mission with them. Written like the very best thriller, it draws the reader into the exclusive world of a combat crew in a unique and truly gripping way. Having interviewed many of the participants, Rowland White tells the story with skill and expertise and manages to bring to life one of the Falkland War’s truly astonishing feats of military endeavour.’ John Nichol

‘I remember all too well the magnificent moment – I was in an Argentine prison cell, held on spying charges – when the news came through that the RAF had successfully bombed Stanley airport. I knew then that the war to liberate the Falkland Islands – the war that our guards said could never be fought – had finally begun. But I had no idea just how that crucial bombing raid had been conducted. It was, as it turns out, a fantastically difficult operation – and in Vulcan 607 Rowland White tells its story for the first time, in gripping, endlessly fascinating detail. I read his book in one sitting: it is an utterly compelling war story, brilliantly written, and all the better for having remained untold for a quarter of a century.’ Simon Winchester

‘Rowland White’s gripping account of the epic air battle in the Falklands war is a masterwork of narrative history. Brilliantly described, the story of an impossible British mission is a compelling one; it’s telling long overdue.’
Clive Cussler

‘If I tell you that this is the story of an epic flight comparable with those of Lindbergh, Mollison and Kingsford Smith you might doubt me. If I told you that this epic flight of 8,000 miles and back took place at 30,000 feet, mostly in the dark over the ocean; that it required dangerously-close formation flying in antiquated bombers and had no emergency landing places closer than a thousand miles, you might wonder what flight I could be thinking of. So it’s good to know that Rowland White has written a detailed account of the planning, the accidents and mishaps of this unique flight. And it was all done in wartime, with the added risk of being shot down. Vulcan 607 deserves to become an aviation classic.’ Len Deighton

‘Vulcan 607 is an absolutely riveting account of the extraordinary courage, determination, and skill of a small group of British aviators, planners, and support teams that managed to pull off an impossible mission against overwhelming odds. Rowland White takes you right into the planning rooms and cockpits, from one end of the Atlantic Ocean to the other, and tells this remarkable story with absolute authenticity. Don’t miss this one!‘
Dale Brown

‘Vulcan 607 is one helluva great flying story. Rowland White’s gripping narrative reads like a suspense thriller, yet every word is true. The RAF’s around-the-world strike at Stanley airport in 1982 with worn-out, obsolete airplanes flown with dauntless courage, grim determination, unmatched professionalism and superb skill was a dazzling feat of arms that set the stage for British victory in the Falklands’ Stephen Coonts

‘From my own time in the V-force I know nearly all the players in this stunning account. Rowland White shows in fascinating detail how this great team overcame all the many obstacles facing it, in record time and with mainly obsolescent equipment. He does not forget the underlying human frailties and politics, and succinctly and accurately describes the characters involved. There is an old adage that if you never prepare for the war you will have to fight and so it was for all the Armed services in this conflict. Vulcan 607 tells how the V-Force (that had for much of its life been cast in the strategic nuclear deterrent role) needed to completely re-think its approach. Years of rigorous training and testing exercises naturally imparted the flexibility of mind that bomber and tanker crews and their support teams needed to overcome the myriad of problems encountered. As always, the greatest stories are about human spirit in the face of adversity of which this account is a brilliant example. It tells us that the ethos of the Royal Air Force is alive and well!’ Air Cadet News